After last year’s Diving Leisure London ‘s EPIC trip to Croatia (read more about it on Jen’s blog here) Alex arranged “The Return of DLL to Croatia” trip and having read and heard all about “The Legend of Mike Coopey” I was amongst to first to sign up!

As usual, the days prior to the trip were anything between frantic and manic. Going diving with SLB Freestyle the weekend before the Wednesday I was flying did not help, nor that the display of one (of the two) handsets of my rebreather died that very weekend!!!

At that point I have to thank Ambient Pressure Diving for their phenomenal Customer Service!!!
I called (in a state of panic) Zoe Monday morning and told her what happened. Tuesday evening, while packing and just before my Wedensday morning flight I got a knock on the door and there it was!!! A Loan Lid!!! Yey!!! – Super Happy!!!

So all sorted and I am making my way to the airport for my flight to Amsterdam. Check-in was almost smooth apart from KLM’s issue with extra luggage. I had bought extra luggage allowance on-line but it looks like their on-line system is not that clever and it does not automatically link the excess luggage with the ticket. Just annoying having to wait at the checking while they sorted it out. Other than that all went well and after a short flight (and some disappointing “snacks”) I was in Amsterdam. A very quick connection flight (hardly enough time to go from my arrival gate to the departure gate) and more crappy snacks and I was in Venice!!!

While waiting patiently for the rest of the group to arrive from London (direct flight – nice!) I thought I should go and get something to eat as the KLM snacks left a lot to be desired! I ordered a “brioche” which was OK although the staff at the counter was between rude and stupid.

After that went back to my seat and patiently waited until I spoted a bloke wearing a SANTI t-shirt and I though “what are the chances?”

So I approached Tony and of course he was the man Maurizio from Krnica Dive had sent to collect us from the airport! So Tony had just drove 4hrs from Croatia to Venice via Slovenia just to collect us!!! How good is that?
And he was about to do drive for 4 more hours back to take us to Croatia!!!Venice to Croa

tia (quite a journey) photo courtesy of Google Maps (thanks google!)After 4 hours of driving and a few passport checks Tony was asking us if we wanted to stop somewhere to eat. Our response was: “Nah we would rather go to Krnica” and eat there (if possible) and after a quick call Tony replied “yes that is OK Maurizio has asked the bar to stay open and wait for us”

Now. I would like us to stop and reflect on this for a second. HOW COOL IS THAT?
I mean the bar stayed open for us!!! – Thanks Maurizio!!! and Thanks KUM!!! Now Wikipedia reliably informs us that Kum is Serbo Croatian stands for best-man or Godfather (if you go for the slavic etymology) or Sand if you opt for the turkish one. Your Call. Either way Pizza was AWESOME!!!

After dinner and before going back to the apartment for sleep we had a quick chat with Maurizio about diving as he was not exactly looking forward to go diving with my YBOD!!!

Maurizio came to take us to the dive shop where we started preparing our gear. Needless to say Maurizio was ready for us!

The Lina sunk when she hit the shore and although her bows lie at 25m depth the stern is at around 50m (similar to our Rondo!)

During the surface interval Maurizio prepared (a light snack) for us – A HUMONGUS plate of pasta – before we head out for the second dive of the day, which, was a reef dive.

Once back ashore and after the mandatory ice cream a quick shower and off for dinner at the Agriturizmo Restaurant. A well impressive dinner with mostly locally sourced ingredients! I lost count of how many courses we had but one thing is for sure. It was awesome and there was A LOT of it!!!

More awesome food at the Agriturizmo!!!

After a breakfast of local VERY LONG SAUSAGES, Cheese and bread (how Continenatl) Back at the dive centre and we are preparing our kit for todays dives

Analysing Gases and Marking Cylinders (and there was a lot of them!!!) – Photo courtesy of Jules Claro

Have we got enough gas?  – Photo courtesy of Jules Claro

As you can see from the above photo all was peaceful and quiet. Until the Germans arrived! But this is a story for DLK to tell… 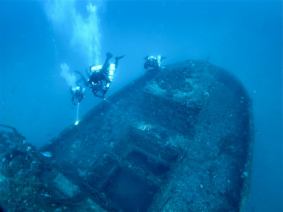 After the dive the ride back involved a lot of sleeping! 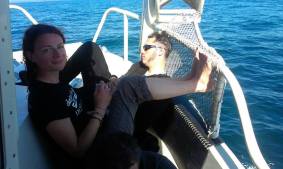 A diver’s life can be really very hard…

Back on the beach for an ice cream but no time for a shower as Maurizio had already started preparing his Humongus BBQ for all of us diving with Krnica Dive! 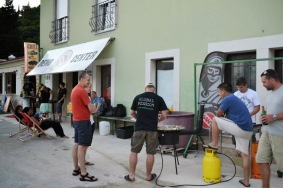 And there were quite a few of us! Free drinks – courtesy of Ghost Fishing (a brilliant non-profit organisation) who had just completed a project of cleaning up Argo were definitely appreciated!!!

Saturday
After a hearty breakfast of local salami, cheese, bread and local sweet and savoury pastys we headed back to the dive centre to analyse more gases, mark cylinders and eventually DIVE the ARGO!!!

Argo was on her way from Venice to Rijeka when on the 22nd of January 1948 she ran into a WWII, leftover, mine. She now lies in two pieces at 50m depth. Eleven, out of twelve, crewmembers lost their life. Source Krnica Dive

Divers on the Bows and Stern of the Argo!

Alex having a light snack between dives! 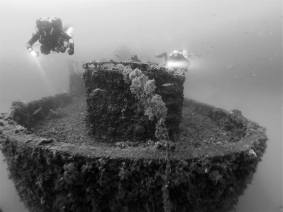 Stern of the Argo – photo courtesy of Jules Claro

After two excellent dives (one on the bows and one on the stern section we made our way back to the dive centre and Krnica.

For dinner we went back to KUM for more of the good stuff! 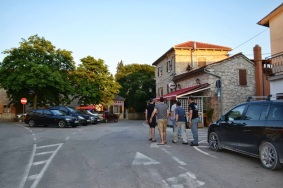 The gang seconds before the “Boy Band” pose 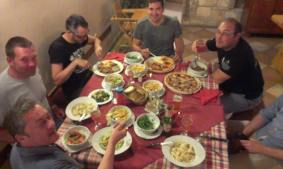 Have we got enough food there?

Pizza, salads, chips, starters all. Lost count of how much food we had that night. What I do know is that we ate it because it was awesome (not because we were hungry!!!!)

The plan for Sunday was quite exciting as the plan was to dive two wercks!!!

The cargo Italian cargo steam ship SS Luana and the Cesare Rossarol an Italian Light Explorer and both were sunk when hit mines. 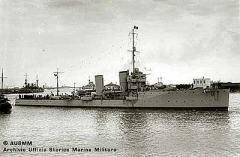 Both now lie at a depth of around 50m

The time between dives was spent primarily sleeping! or eating!

oh yes and other challenging activities like chillaxin and sunbathing!!! 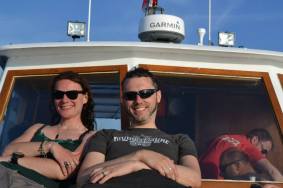 Sunday was great not only because had two great dives but also because I sucessfully tested my brand new APD Black DSMB. As the following photos show BLACK DSMBs ARE THE WAY FORWARD!!! 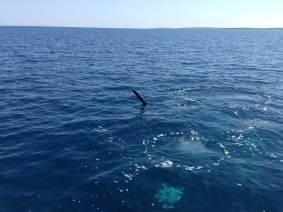 Once more without any intention of breaking the tradition, Ice Cream and Beers followed before we head out for more Pizza KUM! 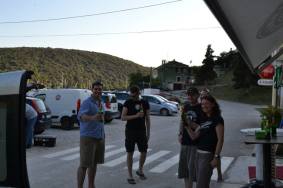 As you can imagine the same scenes of carnage were repeated! Only difference? This time I got an ice cream too!!!

Monday was a bonus day. The plan was to go out and do a bit of sightseeing but as none of as was in anyway interested in anything else other than diving (well food and drinking maybe) we decided to dive SS Vis.

Maurizio drove us to the marina where Jules banged her head on the boat as hard as she could. Blood and pain ensued but there was no discussion about missing a dive so with the help of plaster, duct tape and a hood (primarily to hide the duct tape rather than the cold) we all jumped in the water.

Back at the villa the washing of the kit was leisurly and it involved drinking beer in the swiming pool!!!

Once all the gear was washed and left lying around Maurizio came and we started our way to the Gallerion Museum. Gallerion is more of a private collection of a very enthusiastic local diver and historian and only recently has been moved to this new location so that it can actually be presented to the public. Our guide very enthusiastic and passionate both about history, diving and his collection went through the wars of the Austro-Hungarian Empire, the Great War and the Second World War and how these had resulted in loads and loads of wrecks in the waters of the Adriatic.

After the very informative tour and a quick beer we headed to Konoba Morgan, a local restaurant with excellent food and great view where I had:

And after all that great food it was time to head back to our appartment for our last night in Croatia. Much to my dissapointment I was running out of cash and as there was no cash machine around we had to abort the call for one last drink at KUM (probably for better – judging from last year’s antic’s!!!!).

On tuesday morning Maurizio came to see as off as Tony started the long drive back to Italy and the Marco Polo International Airport.

As expected unfortunately for Tony there was not much talking going on on the way back!!!

A very quiet ride back!

What a great great holiday! I was gutted to have to go so soon and I am going to miss the excellent food, the ice cream, the nice weather, the diving hey I will even miss Maurizio!!!

Hopefully not for long as I am looking forward to go back to Croatia and dive with Krnica Dive again (sooner than later!)

Thanks to all and looking forward to see you all.